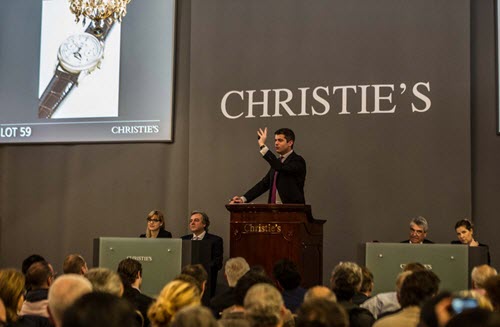 According to official company literature, James Christie conducted his first auction in London on the 5th of December 1766. The oldest preserved auction catalogue by Christie is also from December that year. There are however other sources that indicate that James Christie was in the auction business in London several years before this, or at least in the sales business. There are for instance newspapers from 1759 that includes advertisements for Christie’s sales, and he rented auction rooms from 1762 and onward.

After the French Revolution, London took over much of the trade in international art, and this benefited Christie’s greatly.

In 1823, Christie’s opened a salesroom on King Street in St. James’s in London, and the company has been based there ever since.

In the 1950s, Europe was coming together again after the havoc wrecked by World War II, and in 1958 Christie’s established a representative in Rome, Italy. This was Christie’s very first office outside the UK.

In 1973, Christie’s became a public company listed on the London Stock Exchange. It would remain there until 1999.

In 1975, Christie’s opened a secondary salesroom in South Kensington. This salesroom chiefly handled the middle market.

The subsidiary Christie’s International Inc opened up for business on Park Avenue in New York City in 1977 with a salesroom large enough for about 600 visitors. The first Christie’s auction in the USA was held this year.

Storage service for outside clients

In 1984, Christie’s 100,000 square foot warehouse in London was granted Exempted Status by the British authorities, making it possible for clients abroad to send their precious objects to Christie’s for storage without incurring import duties and VAT. This was the start of what would grow into an important source of revenue for the company: Christie’s Fine Art Storage Services (CFASS).

Towards the mid-1990s, Christie’s in New York City had outgrown their space on Park Avenue, and in 1997 they signed a 30-year lease for 300,000 square foot of space in the Rockefeller Center.

In 1995, Christie held an art exhibition in Beijing, China. Until then, no international auction house had exhibited art in Beijing under the communist regime.

In the mid-1990s, Christie’s needed a spot in New York City where art experts could meet with potential buyers and sellers in complete privacy. The choice fell on a Manhattan townhouse on East 59th Street, which was purchased by Christie’s in 1996.

In 1997, the affluent city of Beverly Hills in Los Angeles county got their first Christie’s salesroom.

Not a public company anymore

In May 1998, Groupe Artémis S.A. (François Pinault’s holding company) purchased 29.1% of the company for $243.2 million. Subsequently, Groupe Artémis bought the rest of the shares in a deal where the entire company was valued to $1.2 billion.

In 2000, allegations surfaced of a price-fixing arrangement between Sotheby’s and Christie’s.

Christie’s eventually gained immunity from prosecution in the United States as one of its employees confessed and cooperated with the US Federal Bureau of Investigation (FBI).

Sotheby’s major shareholder A. Alfred Taubman and CEO Dede Brooks were prosecuted and sentenced to jail.

Christie’s, Sotheby’s and their owners paid a civil lawsuit settlement of $512 million.

In 2001, Christie’s East on 219 East 67th Street was closed down. This division had focused on lower-priced objects.

During the 2000s, Christie’s became an increasingly well-known facilitator of high-profile private transactions. Christie’s did for instance broker a $68 million deal in 2007 where “The Gross Clinic” by Thomas Eakins was sold by the Jefferson Medical College at the Thomas Jefferson University in Philadelphia to the Philadelphia Museum of Art and the Pennsylvania Academy of Fine Arts (joint ownership).

2007 was also the year when the contemporary art gallery Haunch of Venison was acquired by Christie’s and became one of its subsidiaries. This purchase fitted Christie’s increased focus on discreet art transactions, since Haunch of Venison was a well-established facilitator of back-room sales of secondary-market contemporary art in London and Zürich.

In 2008, Christie’s signed a 50-year leas on a more than hundred year old warehouse in Red Hook, Brooklyn in New York City. The company then spent $30 million to convert it into a suitable high-security and climate controlled facility for Christie’s Fine Art Storage Services (CFASS). The warehouse opened in 2010, featuring 250,000 square foot of storage space divided over six storeys.

Since 2009, Christie’s Fine Art Storage Services (CFASS) has been present in the Singapore FreePort, where it takes up 40% of the total space. Christie’s Singapore CFASS serves clients from all over the world.

In 2012, the CFASS building in Brooklyn was flooded during Hurricane Sandy. Situated near the Upper Bay tidal waterway, the facility was hit by at least one storm surge.

In 2013, AXA Art Insurance filed a lawsuit alleging that art collected by late cellist Gregor Piatigorsky and his wife Jacqueline Rebecca Louise de Rothschild was damaged at the Brooklyn facility because of CFASS’s gross negligence.

Later in 2013, StarNet Insurance Co filed a similar lawsuit against CFASS, claiming that CFASS’s negligence had resulted in serious damage to art owned by the LeRoy Nieman Foundation and the artist’s estate.

Christie’s got its first female CEO in 2014, when Patricia Barbizet was appointed Chief Executive Officer.

In 2017, Christie’s closed down their South Kensington salesroom in London. It was partly due to a decrease in sales between 2015 and 2016, and partly because of Christie’s increased focus on their online ventures.

About The history of Christie’s