Over the years, Bonhams has grown into a wide reaching network of offices, regional representatives and salerooms around the world and absorbed several other auction houses along the way, including the famous Phillips Son & Neale. Bonhams is currently represented at 65+ locations around the globe.

In its native London, Bonham has not just one but two salerooms: the old Knightsbridge Bonham saleroom at the Montepelier Galleries in Montepelier Street and the Philips’ old saleroom at 101 New Bond Street. If we travel north from London, there is one saleroom in Oxford and another one up in Edinburgh. The UK is also home to roughly twenty different regional Bonham offices for valuations and consigments.

All in all Bonham is present in over two dozen countries, with major auctions being held in cities such as Paris, Singapore, Sydney, New York City, Los Angeles, and San Francisco.

Bonhams is one of the shareholders of the London-based Art Loss Register, a privately owned database that law enforcement services worldwide can access to help trace and recover stolen art.

History of the Bonhams auction house

By the mid-19th century, Bonhams had expanded into an auction house for all types of antiques, including furniture, porcelain, jewellery, arms, and armour, and they also arranged wine auctions.

In the early 1950s, Leonard Bonham bought land in Knightsbridge, London and created a salesroom on Montpelier Street.

In the year 2000, Bonhams was acquired by Brooks auction house, creating Bonhams & Brooks. In comparison with Bonhams, Brooks was a very young auction house, founded in 1989 by Robert Brooks, the former Head of Cars at Christie’s.

In November 2001, Bonhams & Brooks merged with Phillips Son & Neale, two of only four extant Georgian auction houses in London. Phillips was founded in 1796 by Harry Phillips, 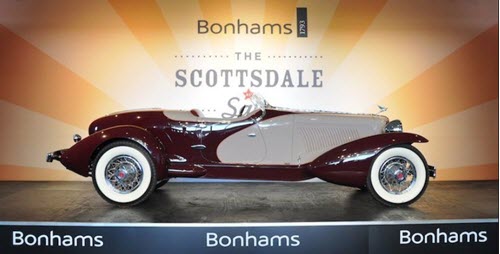 who used to be a senior clerk to James Christie, and Phillips is thus only a few years younger than Bonhams.

After the merger, the trading name of the company was changed to just Bonhams, and Bonhams set up its headquarters in Philips Son & Neale’s old building in 101 New Bond Street.

2005 was a busy year for Bonhams. The company bought back a 49.9% stake held by the French conglomerate LVMH, thus regaining its independence, opened a salesroom on Madison Avenue in New York City, and opened an office in Paris, France.

To increase its presence on the East Asian market, Bonhams opened an office in Hong Kong in 2007. This office works with clients in a wide region, including not just Hong Kong but also mainland China, Japan, South Korea, Indonesia and India. Until 2014, the Hong Kong office also had clients in Singapore, but since then Singapore has had its own Bonhams office.

In March 2008, Bonhams New York moved into rooms that used to house the Dahesh Museum of Art on 57th Street and Madison Avenue.