Based on the Chinese mainland, the auction house China Guardian (China Guardian Auctions Co. Ltd) specialises in Chinese artwork. It is chiefly famous for its sales of Chinese ink paintings and calligraphy, which constitute about 60% of its sales volume.

In 2016, a letter auctioned out at China Guardian in Beijing broke the record for most expensive Chinese calligraphy by selling for 207 million yuan. This was an 124-character letter written and signed by Chinese scholar Zeng Gong in the 11th century. In the mid-1990s, the letter had been auctioned out at Christie’s in New York City where it went for slightly above 4.5 million yuan (approximately 500,000 USD).

Since its foundation, more than 450,000 items have been sold at China Guardian’s auctions. 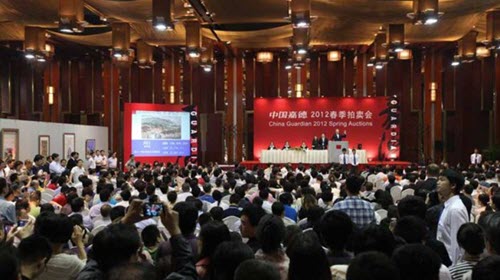 China Guardian was formed in May 1993 and is thus the oldest auction house for art in China. It was founded by Chen Dongsheng, the man who also founded Taiking Life Insurance Co.

Until the mid-2000s, China Guardian was the major auction market for Chinese art, but it has since been overtaken by Beijing Poly International Auction Co Ltd.

Data from 2016 shows that China Guardian at that point owned 24% of Taiking Life Insurance, a company which in turn owned 13.5% of the British auction house Sotheby’s.