A Bugatti Royal was auctioned off at the Royal Albert Hall auction of 1987 for a record-breaking £5.5 million.

Portrait of a Halberdier (auctioned in 1989) 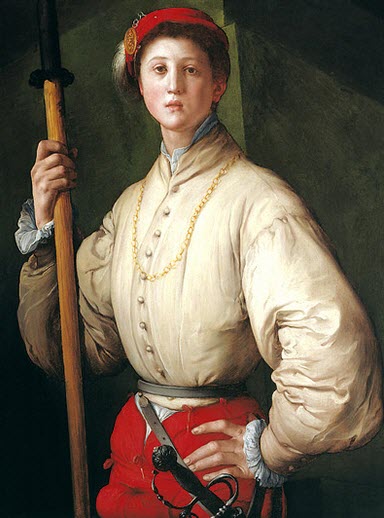 When Pontormo’s “Portrait of a Halberdier” sold for $35.2 million in 1989, it more the tripled the previous auction record for an Old Master painting. The buyer was the J. Paul Getty Museum.

Once the ownership dispute over the Archimedes Palimpsest had been settled, it was auctioned out by Christie’s in New York and sold for $2 million to an anonymous buyer. The buyer is believed to have been internet pioneer Rick Adams, Jr.

The Archimedes Palimpsest is a 10th century Byzantine Greek copy of an otherwise unknown work of Archimedes of Syracuse and other authors. It was overwritten by Christian texts in the 13th century, but much of the original information remained underneath and could be made readable by modern science.

Christie’s auctioned out cars owned by Elton John, including a 1993 Jaguar XJ220 which went for £234,750. Other examples of cars that found new owners were several Ferraris, Bentlys and Rolls-Royces. In total, the auction raised nearly £2 million.

An Imperial Qing Dynasty porcelain bowl was auctioned out by Christie’s in Hong Kong and sold for $22,240,000.

A Stradivarius called “The Hammer” was sold for $3,544,000, breaking the previous record for most expensive musical instrument ever sold at public auction.

Christie’s auctioned out 1,000 lots of Star Trek items owned by the CBS Paramount Television studios. This auction included the sale of an Enterprise-D model used for both Star Trek: The Next Generation and Star Trek Generations. The model was purchased for $500,000.

After being legally restituted to Jewish heirs, four Gustav Klimt paintings looted by Nazis during World War II were sold for a total of $192 million.

Album by Dong Quichang (auctioned in 2007)

An album of eight leaves, ink on paper, by Dong Qichang was sold at Christie’s Chinese Paintings Auction in Hong Kong for 6,235,500 USD. This was a new world auction record for this artist, who was a court painter during the Ming Dynasty.

A new record price for a Claude Monet painting was set when a buyer paid $80.4 million for “Le Bassin Aux Nymphéas”.

The Yves Saint Laurent and Pierre Bergé Collection (auctioned in 2009)

Auctioning out the immense Yves Saint Laurent and Pierre Bergé Collection took 3 days and brought in €370 million, making it the single most expensive private collection ever sold at public auction.

The auction record for Olympic memorabilia was broken in 2012 when the silver cup awarded to marathon winner Spyridon Louis at the first modern Olympic Games (Athens, 1896) sold for £41,250.

The record for most expensive document sold at public auction was broken when The Mount Vernon Ladies’ Association purchased George Washington’s personal annotated copy of “Acts Passed at a Congress of the United States of America” from 1789. This copy, which includes The Constitution of the United States and a draft of the Bill of Rights, went for $9,826,500. The Mount Vernon Ladies’ Association is a non-profit organisation that preserves and maintains the Mount Vernon estate originally owned by George Washington.

Pablo Picasso’s “Les Femmes d’Alger Version O” broke the record for most expensive work of art to be sold at auction at Christie’s New York when an unnamed buyer bought it for $179.3 million.

The Oppenheimer Blue diamond was purchased for 56.837 million Swiss Franc, a record price for a jewel at public auction.

Ruben’s Lot and his Daughters (auctioned in 2016)