LAMA auctions hare held three times a year in Van Nuys, a neighbourhood in the central San Fernando Valley region of the city of Los Angeles in California.

Examples of item types commonly auctioned out by LAMA:

LAMA has become especially famous for their auctions dedicated to individual 20th century artists and designers, such as R.M Schindler, Paul László, and Charles & Ray Eames. They have also helped promote local California artists such as Mike Kelleu, Ed Rischa and Jay DeFeo, and conducted auctions for prominent California estates, such as those of Richard Neutra, Max Palevsky and Linda Sullivan.

Other examples of well-known artists and designers whose creations have been auctioned out by LAMA: Pablo Picasso, Roy Lichtenstein, George Nakashima, and Ettore Scottsass.

History of the LAMA

LAMA held its very first auction on the 10th of October 1992, with 150 lots being offered for sale.

In 1993, Peter Loughrey closed down Bedrock and LAMA since he was moving overseas to continue his education at Sotheby’s Institute of Art in London. At Sotheby’s, he was an apprentice at the Vintage Automobile Department. 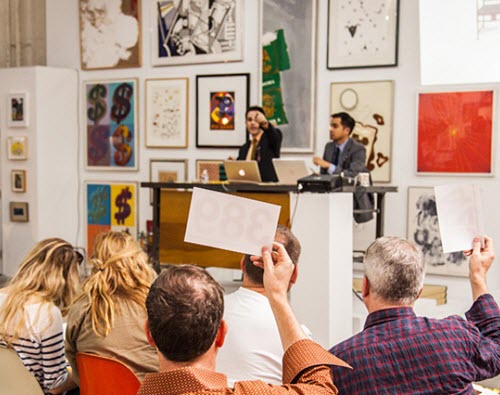 After getting married in 1995, Peter Loughrey and Shannon Loughrey (née Carragher) re-opened the Los Angeles Modern Auctions (LAMA) together. Their first joint auction was held in the Eric Owen Moss ‘Samitaur’ building in Culver City, California on the 18th of May, 1996.

Eventually, LAMA was asked to auction out the contents of the Silver Lake architectural offices of Richard Neutra, which helped increase LAMA’s reputation in the field of modernist design.

In 1999, LAMA recieved their first major fine art commission when they were asked to auction out the Atlantic Ritchfield Corporation’s (ARCO’s) corporate collection of fine art.

Towards the end of the 1990s, LAMA was holding Modern Monthly auctions where the average lot went for less than $500, making them an accessible alternative for people who were interested in owning modern art and design but didn’t have a huge budget to spend. Never the less, LAMA also held some auctions that became famous for their big final prices, such as the record-breaking $129,000 they brought in for a Charles Eames & Eero Saarinen “Conversation” prototype designed in 1941. This was a new world record for anything designed by Eames.

The success with the “Conversation” auction put LAMA on the radar for Eames collectors and in the years to come, LAMA was asked to auction various rare Eames items, including “DCW” prototypes handmade by Eames himself.

In 2002, Playboy Enterprises decided to – for the first time ever – auction out items from the magazine’s archive, and they chose LAMA as their auction house.

In 2008, LAMA moved from West Hollywood to Van Nuys, where they have remained to this day.