Freeman’s Auctioneers & Appraisers – commonly referred to simply as Freeman’s – is a Philadelphia-based auction house founded in 1805.

In a typical year, Freeman’s – located in 1808 Chestnut Street – hold more than two dozen in-house auctions. Historically, this auction house has been especially strong in books, prints and Americana.

After the death of Samuel M “Beau” Freeman II – the sixth generation of the Freeman family to run the company – Alasdair Nichol became Chairman of the company in 2007. A friendly management buy-out was completed in 2016, with the company’s controlling interest being transfered to then-VC Alasdair Nichol, President Paul Roberts and COO Hanna Dougher. 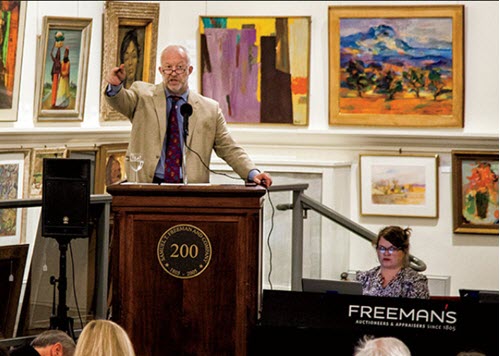 In 1795, the 32 year old Tristram Bamfylde Freeman moved from Great Britain to America and settled in Philadelphia. He was the son of an Angelican minister in Devonshire, England, and had been trained as a printer in London.

After failing to establish himself as a printer in his new home town, Freeman was appointed to the office of auctioneer in Philadelphia by Pennsylvania governor Thomas McKean in 1805, and this is how Freeman came to establish his company.

In addition to working as an auctioneer, Freeman began buying things himself and selling the goods to wholesale buyers. At the time, Philadelphia was a busy port and there was plenty of goods to purchase for anyone with an eye for profit. Eventually, Freeman also became involved in estate sales and real estate.

Throughout the years, Freeman’s grew and opened regional offices in various parts of the United States. In 2000, Freeman’s finally entered the European market, through a strategical alliance with the Scottish firm Lyon & Turnbull in 2000.